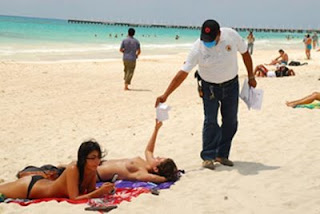 Despite the recommendation to stay at home and change travel plans, Playa del Carmen's main strip, Fifth Avenue, and the beaches of the Riviera Maya looked almost normal, except for the closure of some enclosed businesses, such as bars and clubs.

A local official was quoted as saying: "You can still enjoy and have a good time, provided you comply with health regulations." Meanwhile, hotel occupancy remains at 50%, about 25% lower than normal for this time of year. "The restaurants are operating and maintaining the economy on Fifth Avenue," the official said. 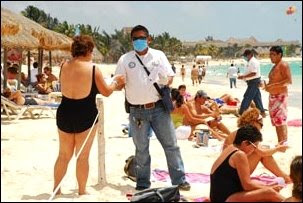 Mamita's Beach, one of the most popular daytime destinations that's a little north of town, indicated a quiet influx of people. The restaurants were open, people were swimming, sunbathing and ordering cold Coronas, just like normal.

The bus stations, taxis and public services are operating at or near full capacity.

There have been no confirmed cases of the Swine Flu in the region. The city's 10 clinics each received visits from 50 to 60 patients with concerns, but none of them ended up being anything worth worrying about.

The Chablé Maroma hotel in Playa Maroma has done what few hotels have even attempted to do -- successfully combine luxury with family-friend... 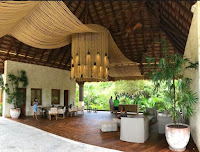